TIME TO FRESHEN UP THE ICE DOG LOGO?

I am not exactly the most creative marketing guru that fell off, well, whatever truck marketing guru's fall off of.  If you take a look at any of the ways that I brand myself, its pretty standard fare.   I usually rotate one of two photos of myself in the wonderful, dynamic and creative pose of trying to look thoughtful and intelligent with a microphone in front of me.

Not exactly the most innovative picture.  Nobody is calling me a Steve Jobs visionary or a 2013 Renaissance Man.  However, I will opine that it is time for the IceDogs to tweak their current logo, and maybe change up the dynamic a little bit.  They may choose to do it next year, but certainly when the new arena opens in 2014 a fresh look and new uniform goes without saying.

Now, as I say this, I say this with the caveat that I actually like the current IceDogs logo and colour scheme. The red and black is bold and the "IceDog" markets itself quite effectively to children, and does it without being cartoon-like.  It certainly was an improvement over the Mississauga IceDogs logo: 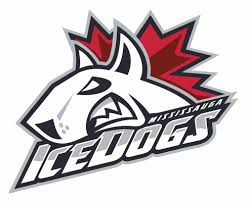 In fact, I own many, many pieces of IceDogs  merchandise, be it t-shirts, golf-shirts, or hats.  My wife has IceDogs  merchandise, and so does my 21 month old toddler.  However, six years is a a substantial amount of time to have one logo in an era of third uniforms and creative changes to a sports brand on a yearly basis.    The IceDogs have had a couple of different styles to their uniform, in particular when they have done their Pink in the Rink game, and it has worked.    It does not have to a grand overhaul, just some changes.  As OHL teams come through the Gatorade Garden City Complex, I am stuck by some of the effective subtleties to uniforms, whether it is added piping, taking away piping, cream coloured uniforms, changes from the standard black to something more reflective of team colours.  There is a lot that can be done without doing something radical like the Mississauga Steelheads did when they changed from the Majors, and the Steelheads took a calculated risk which paid off as their uniforms look quite sharp.

I would add a red third uniform into the mix, and change the front logo to something like a little more old school, maybe encircled or something like that.  The IceDogs have sold t-shirts with that sort of branding last year for the playoffs, and it was a tremendous success.

This is likely not breaking news to the IceDog staff.  No one is going to rush into an emergency staff meeting because the TV guy thinks he's Ralph Lauren.   I would guess that something might be in the works in the not so distant future, if not next year, then the year after.

Sports branding almost demands a different look.  It's what makes the cash registers ring, or I guess the modern analogy is the debit machines swipe.

Just don't do this...don't ever do anything remotely close to this eyesore. Not even Ryan Strome, Jesse Graham or Mitchell Theoret could look good in this disaster :-)