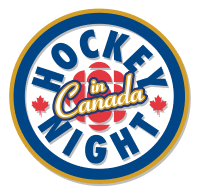 I will start with a large bias.  People will know that I am an ardent supporter of the CBC.  In fact my dream job would either be with the venerable Hockey Night in Canada, or the equally venerable Fifth Estate, which has provided countless quality programming and analysis for my Grade 11 and 12 Law classes. With this disclaimer in mind, a couple of things came to mind when Hockey Night in Canada changed up the roster and the tempo of their show for this , their celebratory 60th season.

First of all the in-studio show added some more personnel and diversity.  Ron MacLean continues to anchor the coverage but the analyst chairs are now filled with PJ Stock, Kevin Weeks, Glen Healey and Elliote Friedman.  Andi Petrillo, who hosted a Game Day show with Stock now mans the Chevrolet IDesk and also joins the panel.   I watched a little of the pre-game show, and at first glance seemed to a "too many cooks in the kitchen" sort of thing, but I"m sure as the season shakes out each person's strengths will come shining through.  Healey, forever the curmudgeon, could stand to be a little more positive and show off his sense of humour.  Friedman is the consummate pro, and the network's best insider while the jury is out on what Weekes and Stock bring to the table.  Weekes just landed at the analyst desk after a spell as the colour commentator with Mark Lee, and he is very well spoken, something that did not necessarily translate as well in the colour commentator position.  A lot of people question whether or not Stock's every man schtick is a workable one or not.  I have worked with Petrillo before and it was no surprise to see her so successful at a young age.   She is personable, well-spoken and rarely makes an on-air mistake.  Overall,  I do like that the CBC did make some changes and took some chances with their pre-game show.

The other two talking points were the 60th Season introductory montage and Coaches Corner.  The 60th season introduction was very well done, save for the fact that it was Aerosmith, a Boston based band that provided the background music.  Maybe Rush, recent Hall of Fame inductees, could have provided the music. Regardless, it should have been a Canadian band.  I did love the look at some of the old fashions worn on the CBC, from the powder blue, to the royal blue.  Hopefully CBC has a throwback broadcast in which all of the broadcasters don the powder blue, and use the old Ward Cornel sitck microphone.   The other elements of the productions from the great calls, to the memorable goals and images were a brilliant history lesson for enthusiasts of Hockey Night.

As for Coaches Corner, I laugh when I see some of the dated critiques of Don Cherry on comment boards.   They still site the perceived Xenophobia, the mispronounced names, the over-emphasis on the military etc.  Its the same stuff as 10 years ago, 20 years ago etc.   If you take a look at Coaches Corner on Saturday, it was typical Cherry as he boasted about how he was right about Nazim Kadri, and the firing of Brian Burke. Now viewers will get a double dose of Cherry as he will be back for the 1st intermission of the Western game, where there will be less of a focus on Leafs games.  I will say this: When Cherry analyzes the game, he is still spot on.  Whether you like him or not, he's still appointment TV, even for those who are his detractors.

I cannnot remember whether or not it was Sportsnet or TSN that used the idea of the Intermission "Panel Discussion", but now the game is broken down into such detail that each magnificent play, or blunder is magnified.   The mantra of live sports production is content, content, and when all else fails, more content.   Hockey Night in Canada will have upwards of 12 hours of content to fill on a daily basis when they have triple headers.   The first week showed that they are ready to embrace that challenge.