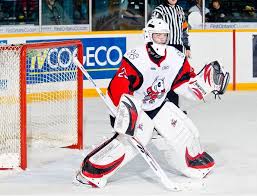 Two teams trending in opposite directions clashed as the Belleville Bulls, losers of five in a row and nine of ten took on an Ice Dogs team that had only lost once in 2012, fashioning a 7-1 record.   The trends would hold true to form as the Ice Dogs burst out to a 3-0 first period lead on route to a comfortable 6-0 victory.  Brett Ritchie lead the way with 2 goals, while singles were added by Freddie Hamilton, Andrew Agozzino, Mitchell Theoret and Trevor Peterson.  Agozzino's first period tip in of a Luke Mercer shot was the 148th of his career, tying the franchise record established by Patrick O'Sullivan.   Mark Visentin would pick up his second consecutive shutout and now has a shut-out streak of 152 minutes and 12 seconds.  The clean sheet posted was the 6th of the season for Visentin and that is good enough for the OHL lead in that category.

Highlights of the game can be found here:     Niagara 6 Belleville 0

The Ice Dogs now embark on a stretch of the season that will see them play 8 of their next 10 on the road.   They start a three game road trip in Guelph on Friday night, then have an important tilt in Brampton on Sunday and then face the London Knights, the best team in the OHL.