FRESHENING UP THE MEMORIAL CUP FORMAT 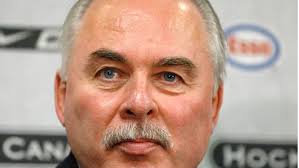 As a broadcaster of Junior hockey, I take more than a passing interest in the Memorial Cup, regardless of who is playing in it.  This years' tournament takes on a heightened interest as there are those currently revelling in the lack of success of the London Knights, arguably Ontario's most despised teams.  Fact of the matter is that few should be surprised that the London Knights have failed to impress so far.  This is a team that was inactive for over 50 days before the tournament began due to their 5 game ousting by the Guelph Storm, who are unsurprisingly odds on favourites and have already booked their place in the final on Sunday.  I know that prior hosts who did not make their league final have had success in the past, but man, it has be tough to find that necessary edge in your game after a month and a half lay off.  Give me a tired team in a play off rhythm any day of the week over a lethargic inactive team.

The Memorial Cup is a curious format as 4 teams battle it out round robin style, and play in either a play in game, a semi final game and ultimately a final.  All this takes 10 days and often you can have games have absolutely no bearing on the standings, or an inordinate amount of time before playing meaningful games.  Again, take Guelph, whose game against London means absolutely nothing to them except the chance to excuse their rivals, London.   That means Guelph has to sit and wait for five days between games that actually mean something.  No other tournament I know has games that have no bearing on the proceedings at hands, let alone a national tournament like the Master Card Memorial Cup.  Freshening up the tournament, any tournament for that matter, is a calculated risk with the leagues in question and more importantly the sponsors.  That said, here are a couple of ways to freshen up and expand the playoff format of the Memorial Cup.  Heck, baseball, football and the NCAA have added teams recently, and hockey re-jigged the divisions to create more meaningful match-ups. Why not the CHL?

SUGGESTION 1:
8 TEAM, TWO GAME TOTAL POINTS SERIES COMBINING WORLD JR AND EUROPEAN SOCCER.
The teams would be the 3 league champs, the host team, the 3 league finalists and a wild card team selected.  Here you can rotate the league that gets the wild card, depending on the host.   Teams are seeded 1-8, and will play two games, total points series. with the tie breaker being "away goals" as you designate one team to be the home team for one game, and one to be the away team for another game.  This is what a lot of European soccer competitions do. If it is tied, then you go with a sudden death overtime .   When it gets to the Final 4, it becomes a one-off elimination.  Think of it, you can have two games each day for the first four days as 8 gets cut down to 4, and then a day off and then semi-finals and then finals.

The cons of the competition are the fact that you have two guaranteed games versus three right now.  There could be arguments, as there always are, about a nominated wild card team.  There would also be less emphasis on the league winners, as all it would net would be a higher seeding.

SUGGESTION 2:
Three league winners, and if the home team gets knocked out before the final, they have to play in a round robin tournament with the other three league finalists to determine the final spot in the final four.   In all likelihood, its not that dissimilar to the first suggestion, though it does not guarantee much pop for the hometown crowd whose team may not make the main tournament.

I suppose if you really wanted to get radical, you would make it a 16 team tournament with the three league winners and a host team helming their own final four , with league finalists and semi-finalists comprising a regional sweet 16 much like the Sweet 16.  That might be too radical though.

To be honest with you any suggestions would have to pass the smell test with Dave Branch, the CHL, the major tournament sponsors, and Sportsnet, who have the rights to the tournament for the next 12 years.   That is what drives the bus.  Still, right now it still seems to be too many days for too few meaningful games.
Steve Clark- Niagara IceDogs TV Play by Play
Posted by Steve Clark at 10:13 AM