In the booth, opening night at the Meridian Centre. Ed Burkholder (left) and yours truly (right)

Phew! That's all I can say after a whirlwind weekend that involved three games, two home openers and one arena opening.   Three hockey games, all with varying degrees of emotion had me drained by the time 10:00 Saturday evening. That was when I was officially done and could start to reflect on what was certainly not a routine weekend of broadcasting. 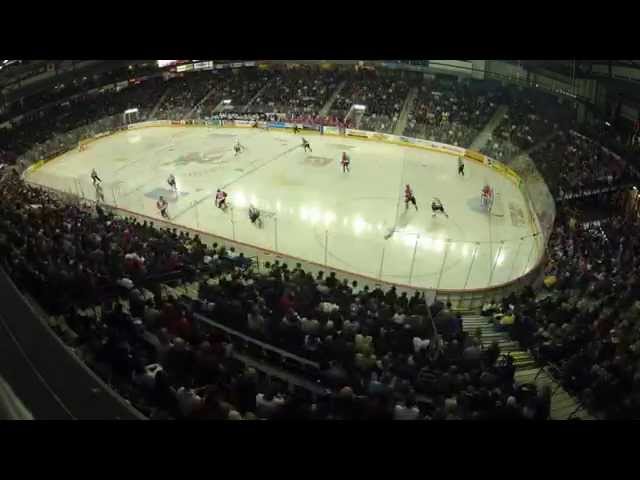 The Meridian, by the way, is a spectacular building.   From the time that I first walked into it, I was awestruck by the obvious care that was put into the building as well as the quality of the work.   Blue seats provided a wonderful visual.  The private boxes were beautifully constructed and our broadcast booth, was everything we could ask for and more.   Yes, there was some grumbling about line ups to get in the building, what might happen if it gets cold and you're stuck on the bridge.  Some took to social media to grouse about the Draconian measures that had been put in place.  Note to those people:  This is a brand new spectator facility, not an aging cramped building that the Jack was.  It is run by a professional marketing group, who specialize in running arenas.  It's not that big of a deal to have your bag searched Outside beverages are going to be confiscated and no one wants to sit beside someone who reeks of smoke.  So you won't be able to leave the building to fire up a dart and hope to get back in.  Sorry.

Now, that said, for people who specialize in running a building, and by default, customer service, they could use a lesson or two in terms of how to deal with people.  I will put it down to opening night angst, in which everyone was on edge and everyone wanted things to run smoothly.  Also, many people had a reasonable list of grievances, and those will be looked at.  It's all part of ironing out the wrinkles in a new building.

On to the hockey.  The first night it did not take long to make history as Mikkel Aagard of Niagara scored at 1:32 of the first and we were off and running on a rollicking wild ride that saw the IceDogs win 7-4, almost coughing up leads of 4-1 and 5-2 in the process.

Here is how the first goal looked and sounded:  (and yeah, for some reason I got the poor guy's first name wrong)

The sense of relief was evident by all, especially the IceDogs, as they had started off the year 0-6, and to have a loss hung on you opening night would have been a real downer.   The IceDogs would go on to win their 2nd game at the Meridian Centre, 4-2 over Sudbury in what was a far calmer night both on and off the ice.  Overall, hats off to all as the new barn is simply magnificent.

I was at more familiar surroundings on Friday as the Hamilton Bulldogs opened up their 2014 -2015 home portion of their schedule versus the Marlies on Friday.   The terrifying catwalk journey has not changed, and I swear the floor was less stable this year than it was last year.   First Union Centre has added a couple of amenities this year with the advertising ring that was featured last year back in full force and apparently there is a new poutine place, and what goes better with hockey and $3 beer?   Naturally poutine was answer.  Arteries start your hardening! 5800 people were on hand for the Bulldogs/Marlies home opener and we all got a treat of seeing the new OT rules in full force.  Three minutes of 4 on 4 was followed by four minutes of 3 on 3 and both teams had the long change for all of the OT period.   Toronto and Hamilton traded odd man rushes, break aways, and the OT was wide open before Hamilton's own Spencer Abbot ended the game on a breakaway.  Unfortunately, the Hamilton native plays for the Marlies, but the faithful went home entertained by the new OT, which will hopefully see less of the silly shootout competition.

Saturday's game, as I alluded to before, was a calmer affair than the sell out arena opening.   3900 plus were in attendance to see the IceDogs double up on Sudbury 4-2.  The Dogs are now 2-0 at home and 0-7 on the road, something the team hopes the hockey gods even out as five of those road losses have been one goal games.  A personal favourite part of the evening was when the Meridian Centre staff was dishing out free hot dogs post game as they had made too many.   I have learned two things about being with the media and being on TV.  One, wear make up as it takes the shine off your forehead (and I have a rather large forehead) and Two, never turn down a freebie of any kind!

Two games later this week, both at the Meridian Centre on Thursday and Friday! See you then!
Steve Clark
Posted by Steve Clark at 11:06 AM