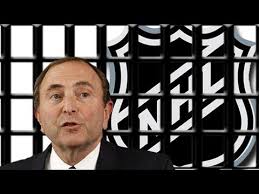 As the NHL Lockout lurches into its 3rd week, the punchlines are becoming more plentiful, the players are scattering for greener pastures, and what the NHLPA and the Owners are calling negotiations, others are calling a colossal waste of time and energy being devoted to such subjects as drug testing payment plans.  Man, even the elephant in the room has gone for a snooze.

Meanwhile, as the NHL will learn, fans will find meaningful things to do with their time in the absence of NHL hockey.  Junior, AHL, and ECHL hockey will get a boost in live gate and eyeballs and earlobes watching and listening to their games.    Plus, other sports already more popular than hockey will help pick up the slack. The NFL, already a marketing machine, and the NBA, another hype built product, will gladly take their places on TV and in sports bars around North American.  Those leagues have already deftly negotiated collective agreements no one thought could be finalized in the time it took to put the old John Hancock on the contract and the NFL has already worked around a potential PR disaster with replacement officials.

That said there is a surplus of people who are dependant on NHL hockey for their main source of revenue.  Sports bars will not fill up on Marlie game night the same way it would on a Leaf game night, so your favourite bartender and server will see a significant reduction in tips.  That friendly usher who greets you in Section 211 will see his hours cut, same for the concession worker who gets your beer and hot dog.  Those hardworking people who are behind the scenes have been laid off, or seen their hours cut.  This includes the likes of the Florida Panthers mascot, and what could be worse than a lonely mascot on a street corner looking for someone to entertain.

For junior hockey, the era of uncertainty has begun.  Teams like the Niagara IceDogs do not know how long they will have the likes of Dougie Hamilton and Ryan Strome playing for them.  Those guys could be valuable  trade chips down the road, or valuable pieces as the IceDogs gun for a deep post-season run.   Other teams are in the same boat with their young talent.  Sure the game will be more star-driven and a little better, but these are athletes whose goals remain firmly on the NHL.  They can be forgiven if the shine has come off their game for a little bit.

Meanwhile the hawkish owners under the guidance of their tiny mentor try and squeeze the maximum that they can out the players, despite the fact that the salary cap system they have in place was supposed to regulate the outlandish salaries.  Funny thing is, once these teams and owners agreed to the salary cap, they went out to hire a "Capologist" whose main goal was to manage, and apparantly circumvent the cap.  While the players have some of my sympathy, those who have selfishly gone off over seas and pushed a player away from a job, appear to want to have their cake and eat it too.  Brotherhood, it seems, is only good until there is gainful employment to be made in the KHL, or other European leagues.

A third lengthy lockout in 20 odd years is well on its way to becoming the legacy of Gary Bettman.   The NHL sadly, cannot see the forest for the trees, and has failed to realize that leagues far more entrenched and successful than they are have managed to avoid major labour strife and have become better for it.

The NHL, already on fragile ground, and with a tenuous fan base in some markets, risk the worst of all emotional responses, that being indifference.  Billionaires and millionaires fighting over profit do not seem to engage the average fan.